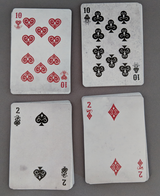 The Llod's Carnival Playing card deck is a unique set of limited edition playing cards with the theme based in steampunk, science fantasy and ancient alien technology. This deck is the first in a series of 3 and is limited to a print run of 1,000 decks. Future decks will expand to include other incredible characters within Llod's Carnival and its origins.

The playing cards that are contained in this deck are illustrations of some of the main characters in the upcoming Llod’s Carnival book. The character designs illustrate each of their special steampunk devices which enhance their natural innate abilities. Unknowingly they may pay the ultimate price for exploiting the technology of those devices without fully understanding the ramifications. The bottom pose of each character demonstrates the potential consequence if they make the decision to overuse and abuse the technology. Each character transforms into a ghastly, dying image of their former self caused by the toxic alien radiation which emanates from the steampunk gadgets.

There are two extra suit cards in the deck and may be used as gaff cards. For every deck in the 3-part series, there will either be one or two additional suit cards to add to your collection.