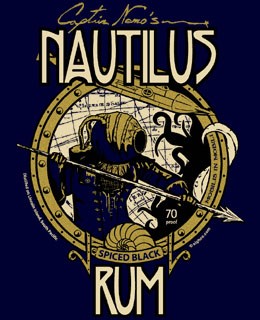 Captain Nemo set out to explore the seas in his self-designed submarine, the Nautilus, after fighting the British Conquest. While he devoted his time to scientific research and the study of marine biology, Nemo also performed many feats of bravery.

Now, known as a hero in his homeland of India, he has retired on Lincoln Island in the South Pacific where the rum distillers have created a liquor worthy of the stalwart captain and bestowed his name upon it. Captain Nemo's Nautilus Rum is as dark, spicy, and as complex as the man himself and is a drink that deserves to be sipped slowly over ice.

Designed by our friends at SighCo Graphics